Back to Yangon, Myanmar 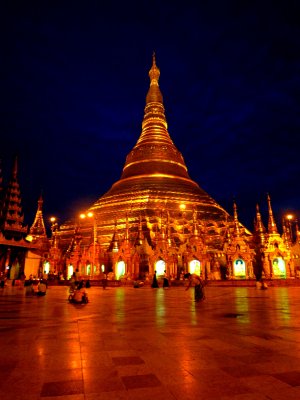 .
I sat in the teashop waiting for the overnight bus from Inle Lake to Yangon, telling a large group of locals there about the things that you can do on the internet. None of them had even heard of facebook and they were amazed! I then noticed that a group of westerners had just sat down at a table nearby, obviously there to catch a bus too. I was still quite surprised to see them! It sounded like they were comparing dollar to kyat exchange rates with each other and trying to work out the menu without having to ask the people in the teashop.. At that moment I again realised the benefits of travelling alone. I can talk to these people any time at home but i am in Burma and have a unique opportunity to learn from the locals, swap stories with them, teach them English. These other travellers annoyed me actually, I had got so used to not being around them while in Myanmar. I saw a quote about tourism from a resident of Yangon ‘Don’t come in with your camera and take only pictures. We don’t need that kind of tourist. Talk to those who want to talk. Let them know the conditions of your life’. There was some sensitivity needed though when talking to residents here. On the trek for example, Thet would openly talk about the military government, poverty and monk protests but only when we were in the middle of nowhere. If there was any chance of someone listening in he would respond to any questions with ‘i cannot talk about that sorry’. People here can be put in prison for disagreeing with the government. I thought it best to only let the locals initiate these kind of conservations. 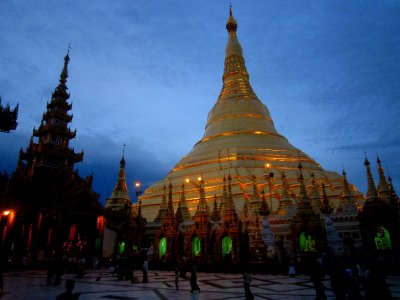 The teashop people insisted on carrying my luggage onto the bus for me when it finally arrived and waved me off. Cue the overnight bus ride FROM HELL!! I had already overdosed on immodium and taken rehydration salts so didn’t have to worry there. The ride started off pleasantly enough. We drove back uphill through Kalaw, where I had started the trek a few days ago. The bus took over 2.5 hours to get there, such a long way, I felt pretty proud of myself. We stopped off just outside of Kalaw for a biobreak and this was where the trouble started. Waiting to be ushered back onto the bus there seemed to be some kind of fuss over the battery. There was a group of guys with torches looking at it, scratching their heads and repeatedly hitting the battery with a hammer. Oh dear this does not look too good! We did get going again and it was fine for a while, drove through some AMAZING mountainous scenery down to the main highway to Yangon, and watched the most incredible sunset. Two hours or so down the road though we stopped again and this time the electrical problems meant that the air conditioning got switched off. Believe me this is really not pleasant on a crammed bus in this kind of heat where it was not possible to open many of the windows. I was sat next to a rather overweight man too, argggghhh claustrophobia, felt like I couldn’t breathe. I then realised that this should actually be the least of my worries, WE WERE DRIVING ON THE MAIN HIGHWAY TO YANGON AT NIGHT WITH NO HEADLIGHTS!!!! I wish I were kidding... Such a long journey though and knackered from the trek so i did manage to nod off, to be woken by a flashtorch being shone into my face WTF now.. There was a guy in military uniform stood outside the bus blowing a whistle and shining the torch onto me, furiously ushering me to get off the bus! It was a government highway checkpoint, I needed to get off the bus all bleary eyed and show my ID. In Myanmar, the government seem to like to know where you are at all times. It is apparently quite common for visitors to be followed by government officials at some point in their travels to ‘keep an eye on them’. I didn’t notice any of this myself but the restrictions on foreigners travelling to certain states in Myanmar was rather annoying. I would have loved to gone to visit some of the minority tribes in the Chin state to the West or the Kayin state in the East. Sadly, the Myanmar government stop visitors going to many states because of continued insurgents fighting for independent states or against the military rule of the country. It is possible to get to some of these states without government permission but being wet season this was risky and near impossible.

While I am describing this horrendous bus journey to Yangon I will also take the opportunity to bring up the subject of spitting in Myanmar (pardon the pun hehe!) So, everywhere in Asia people spit right? I mean everywhere, the universal dawn chorus, loudly catching the phlegm in the back of the throat then indiscreetly expelling as noisily as possible. It is something, along with squat toilets and cold showers, I have got real used to during my travels but will definitely not miss back in the Western world. I have been to India, the land of shitting and spitting in the streets, it was bad enough there, but Myanmar i swear is the world capital of noisy spitting. It makes you seriously wretch. Why do they do it? It is perfectly acceptable here, not seen as gross or impolite in any way. But why do I not feel the huge urge to spit all the time? I don’t really get it. Anyway, on this hellish cramped, hot bus with no headlights we had what i thought were rubbish bags, clear plastic bags hanging on the back of every seat. To my disgust, and this takes a lot to disgust me, I realise what these bags were being used for... yes you guessed it, COLLECTING SPIT!! There were a couple of ladies sat the other side of the aisle from me, two young children on their laps, having a good old chinwag, just stopping once in a while to add to the pool of spit building up in their bags. I thought they were drinks at first, one of the ladies had a clear ‘drink’ the other a dark red one. Yes, her spit was dark, surely this is something to worry about? I honestly thought i was going to hurl and had to stop myself looking. I just had to accept it though really. At around 7am IN DAYLIGHT YESSSSS we had survived the night with no headlights, we stopped at a kind of service station but was like one huge communal wash room. The worse toilets i had seen in asia next to a huge teeth cleaning area, sink after sink with mirrors and people spitting EVERYWHERE!! I rocked up next to the only vacant sink, next to a monk (always a token monk on every bus, plane or truck journey here) and tried to ignore the spitting chorus so i didn’t gag on my toothbrush! Wow hope you are not reading this while eating your dinner sorry!!!!

The journey from hell, some of the worse hours of my life, lasted a total time of just over 18 hours! Checked straight into hotel in Yangon where I slept for most of the day, but with the drugs now wearing off i was also very very sick. I have never had such a severe gastric problem before, I still had eaten very little in the last few days and felt very weak. I did though, maybe stupidly, decide that i must pay one last visit to the Shwedagon Paya buddist monument, at sunset this time. With no fuel in the tank, but nothing there to give me any embarrassing emergencies, I took a taxi to get me there for sunset. I took the elevator up to the paya this time, not even the energy to climb the stairs. I sat in one of the temples on the side and again marvelled at this astonishing sight. The gold, the marble, the diamonds, special atmosphere, the devoted people, the pure magic. This country at its very best. My heart sank, I wish it didn’t, when a young group of locals approached me and asked me if they could talk to me, practise their English. I was not feeling up to this, actually was struggling with dizziness at that moment. They were the sweetest, innocent, people you could meet and were very interested in anything i told them about my life in England and my travels. The problem is, they were bombarding me with questions, the place was spinning, I started sweating. One of them noticed and asked if i was OK. Rather than explain I just said i was very tired from trekking, they finally left me alone, promising to visit me in England one day. 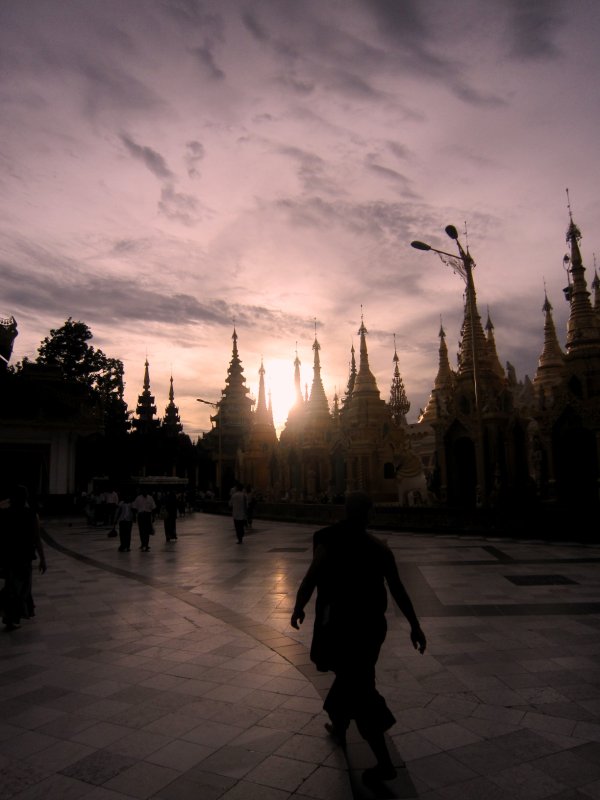 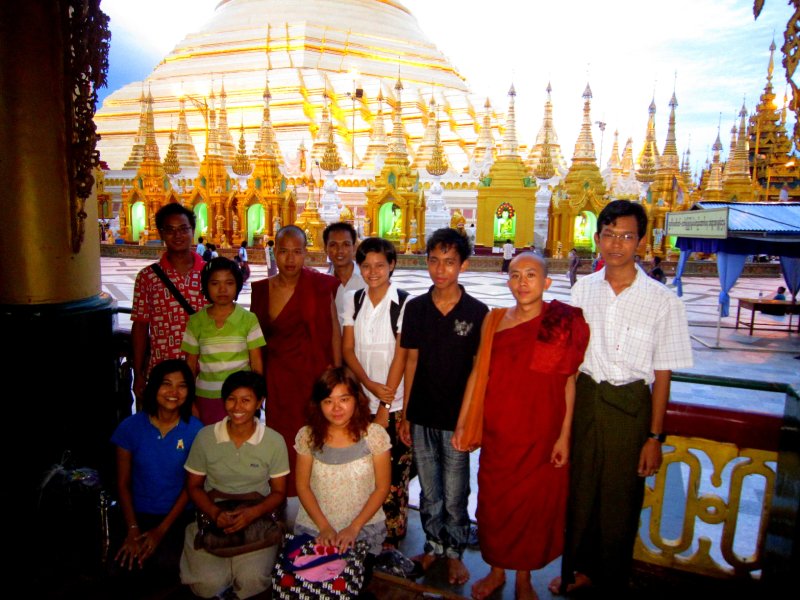 Bombarded! Giving yet another English lesson.. 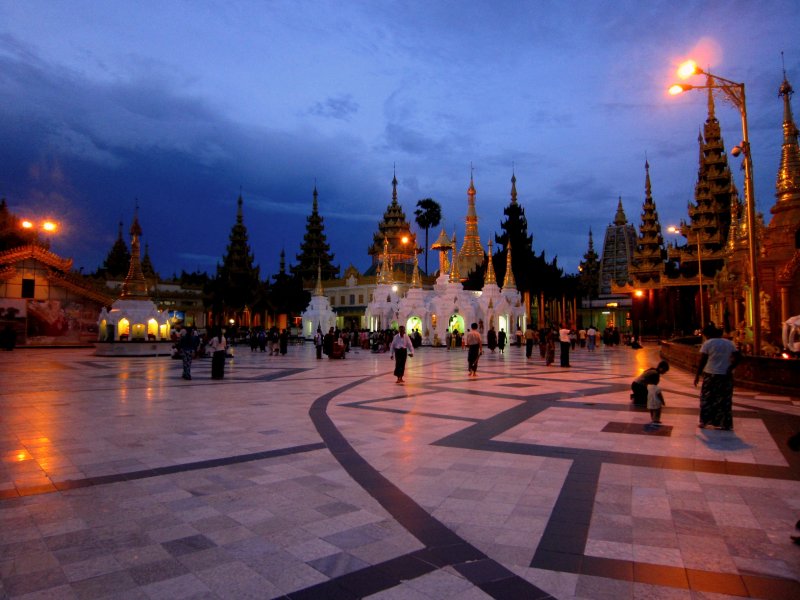 I still managed to enjoy the majestic sunset at the Shwedagon paya. The huge gold stupa reflecting the ever changing light, the diamond on top going through a kaleidoscope of colours. Bells ringing, people praying, lighting incense, meditating, chanting, socialising. Seriously, everyone should have the pleasure of visiting this place at least once in their lifetime. As soon as the sun disapeered I attempted to make my exit, tummy was not feeling so good and i still felt real dizzy. On the way out though an enthusiastic monk approached me to practise his English. It would have felt rude not to stop for a while. His name was Shinmar and he was an unhappy monk! He told me he didn’t want to be a monk anymore, he would love to travel like me, his family would be disappointed if he went back to a normal life. He gave me his email address and I made a necessary hasty exit to grab a taxi as quick as possible back to my hotel to spend the night being very sick, high fever and headache too. Flight to catch in the morning out of Myanmar to Bangkok (if they let me in with my fever!). My experience in this country has been unique, inspiring, challenging, tiring and emotional. Beyond all my expectations. I will never forget this. 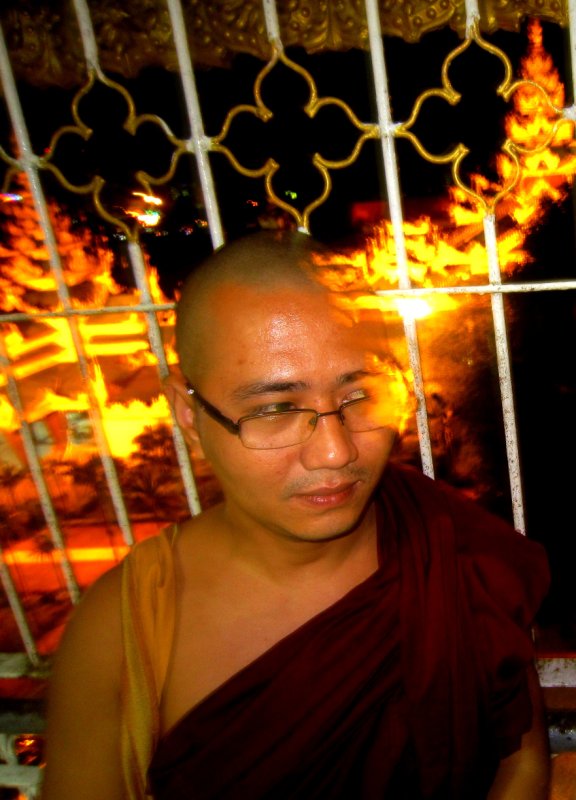 Shinmar, the unhappy monk with his head on fire? 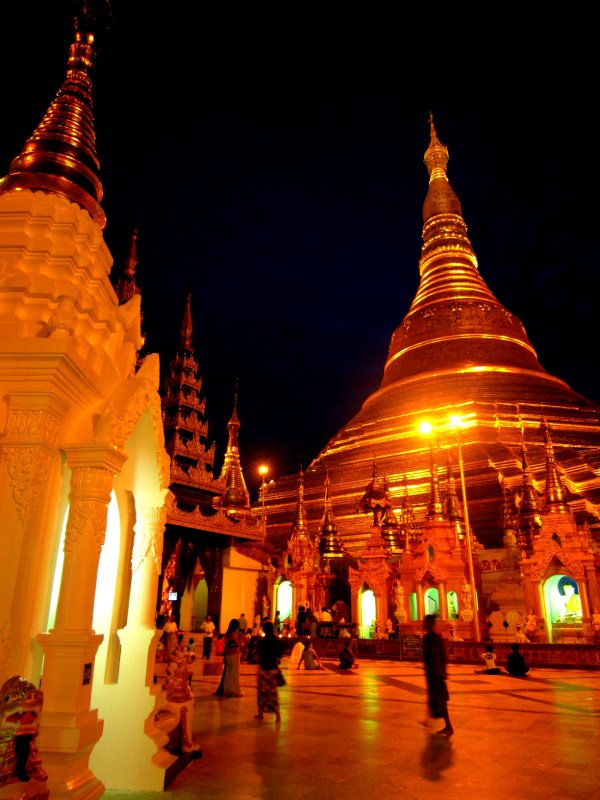 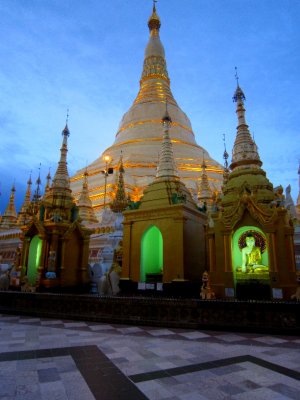 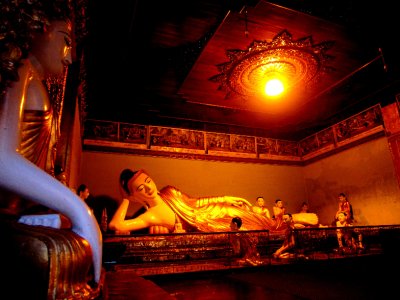 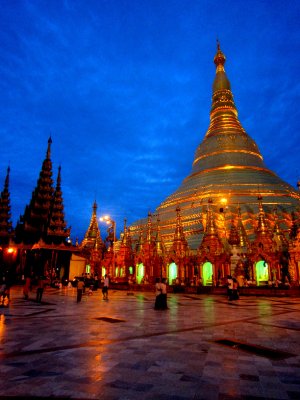 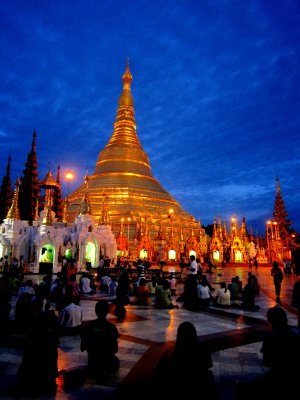 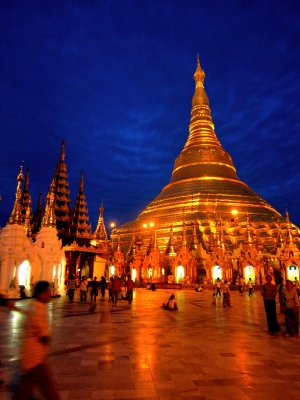 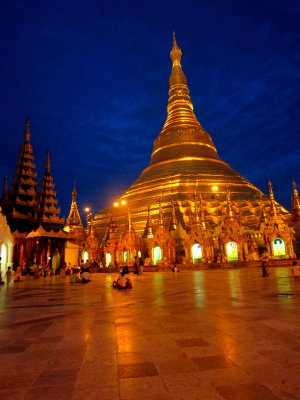 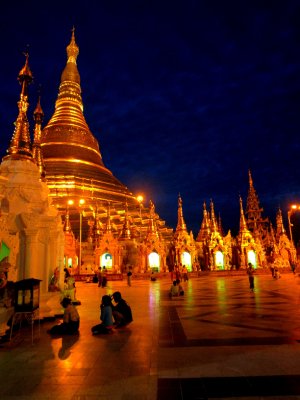 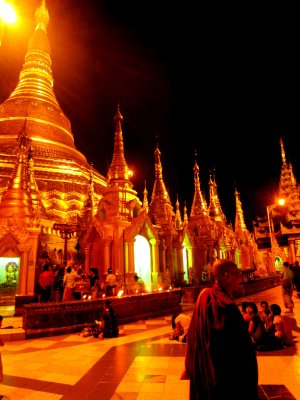 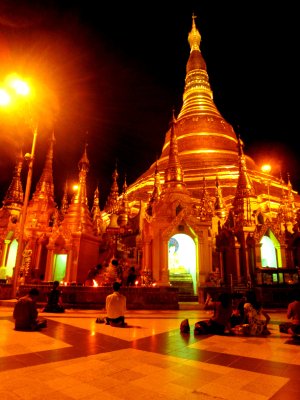 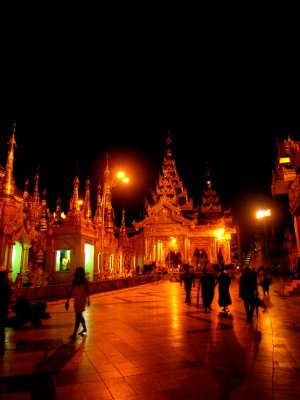 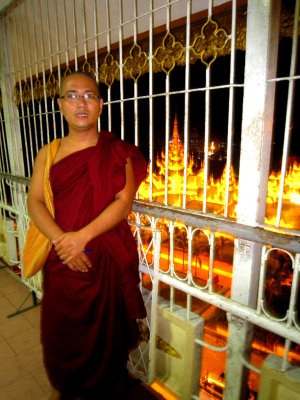